Humanoid robots – we’ve all heard about them, but not everyone is quite so keen to decimate the human race, like what always seems to happen in the movies. There are, in fact, some gentle robots out there, as endearing as the likes of R2D2, or even Baymax, the robot with the big heart from futuristic animation, Big Hero 6.

Nao is one of these gentle robots that we like to call a robot companion, whose super power is the ability to calm autistic children and support them when learning about the world around them and the people in it. 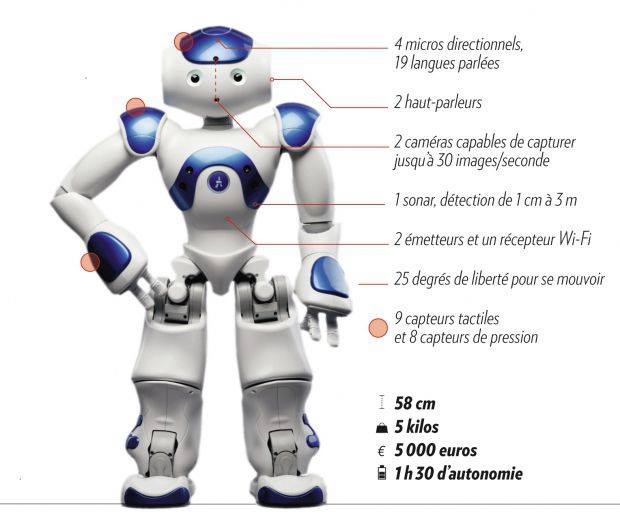 So, meet Nao: 58 centimeters tall, with 2 transmitters and 2 sensor cameras for interacting!

Just to remind you, autism is a severe early-onset developmental disorder that appears in children before the age of 3. It is characterized by isolation, disrupted social interactions, difficulties with language, non-verbal communication and ritualistic behavior with restricted interests. Three cumulative elements characterize autism: difficulties communicating, disrupted social relationships and behavioral issues.

The association Autism Without Borders decided to test Nao as a new learning tool, using the Nao robot to help teachers grab students’ attention when they’re trying to teach and help maintain this level of concentration. Take a look yourself!
How is it possible? Nao doesn’t have the thousands of different facial expressions that we humans do, expressions that people with autism find very difficult to understand and interpret. So how does Nao get more from young people with autism than any human or teacher could ever hope to?
The first answer to this is that perhaps the robot doesn’t give off any ‘social signals’, such as head movements, frowning or smiling for no reason, which are specific to us humans when we want to interact – something that people with autism have to constantly translate internally.

Nao has a neutral expression that can help children feel more at ease, because they understand much more easily when they aren’t distracted.
Another part of the answer is that Nao shows no frustration when having to repeat certain things to a child again and again as they learn. Nao never tires, and can play endlessly. Finally, Nao is predictable, the same size as a child and clearly looks like a fellow playmate.

Unlike his counterpart, Leka, Nao speaks and can help children with autism to develop their communication skills, even being programmed to speak for you.
The Rob’Autism experiment is a perfect example of giving young people with autism the tools to program a robot, making them say what they’re unable to express themselves.
According to the professionals, every session with this program is equivalent to 3 years of therapy!

To find out even more:
here’s an article on Nao and Autism Without Bordershere’s a presentation on the Rob’Autism project
The Robots association!